Taming the Octopus - The Many Arms of Writing: Common Core

Taming the Octopus - The Many Arms of Writing: Common Core: Okay, outta the way with my accusatory statements about Common Core and then we can get on to other topics in another blog post. I co...
Posted by Kendra Wagner No comments: 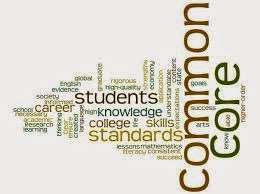 Okay, outta the way with my accusatory statements about Common Core and then we can get on to other topics in another blog post.

I could actually argue FOR or AGAINST the CC, with my ammunition of evidence and citations, to use a little lingo from the well-known source itself.

I am becoming - via the Internet - uh oh - some sort of expert on the Common Core Standards because:

a) I spend a lot of time translating and navigating convoluted assignments given to my students in approx. 4th - 10th grade. Which are based on the Common Core. While I can beat the drum of critical thinking just as much as the average administrator, I also know that developmentally the writing brains of 11 year-olds are not ready for this level of argument.

Talk about turning a kid OFF to writing!

"Write and alternate ending to the short story,
Murders in the Rue Morgue
and analyze the two main character's motives in one paragraph, using textual evidence."

b) I like to find out what is on the minds of the majority of stressed-out teachers in the U.S., given that they are the unsung heroes and they don't really get their own form of Veteran's Day to honor their sacrifice.

c) I used to teach in a school where we had to turn in precise lesson plans to our principal, with the numerical listing of the Illinois State Standard right alongside them. It didn't make me a better teacher, but I learned to write tiny, and could spout some lingo in the standards to said principal.

d) I was initially excited years ago about the concept of standards being aligned between states. "Clear goals and confident, well-prepared students." It sounded so hopeful! Just like in this video!

e) Since some families move a lot, and teachers do too, it sounded promising. Plus, when I traveled and presented staff development I had to re-learn some particular differences between states. Confusing. Finally we could have the same oral reading fluency benchmarks, fractions taught in a hands-on way at about the same point in 4th grade, and history key points would not be sanitized of the Native American's impact on our country.

f) I am assisting two homeschooling families in teaching using CC starting next year. We don't have a principal observing our lessons, but we have to turn in monthly reports proving we did academically worthy, Common Core stamped of approval-ness instruction.


I am happy to find sources like this to pick and choose from. Phew. Lessons and example writings from actual kids, and a fairly easy-to-use website.

And then there are those techie people who save the day with websites like this one, where we have a fashion runway of apps and software to make teaching life easier or more complicated, depending on how organized or techie the reader of the website is!

I am going to rebelliously NOT wrap this up with a neat little conclusion, because this was not a "5-paragraph essay" and it is midnight.

Posted by Kendra Wagner No comments: